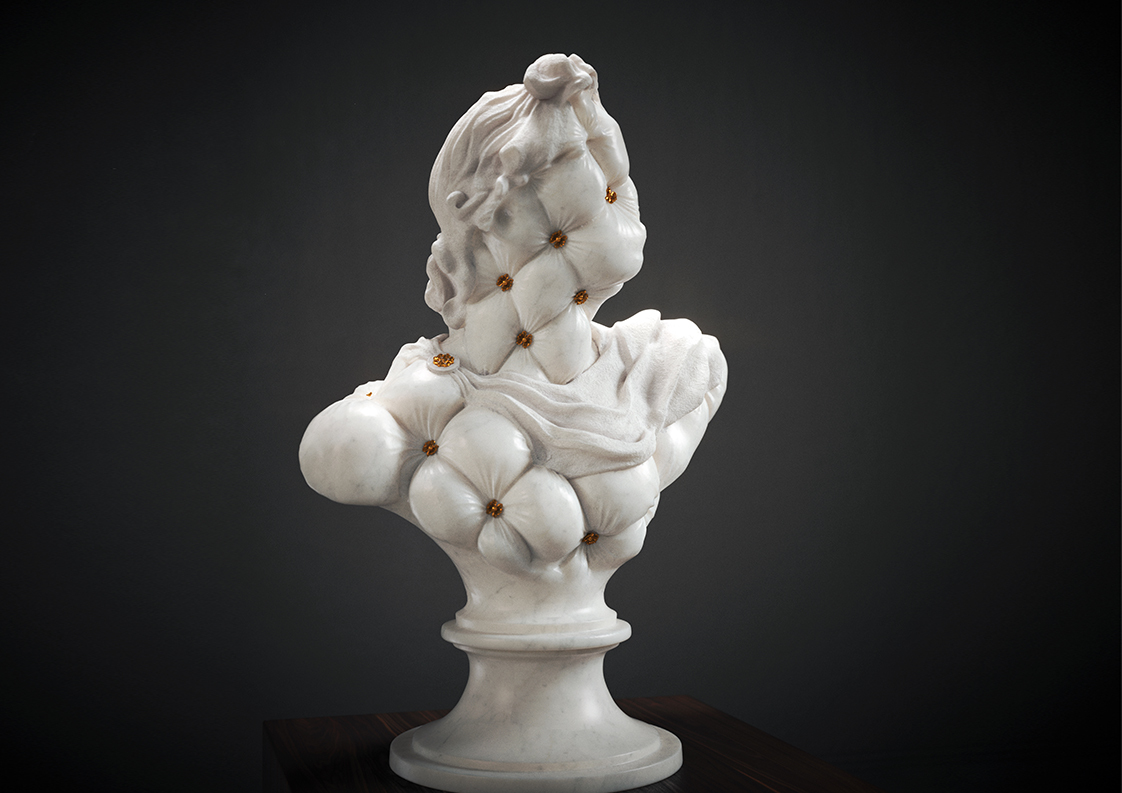 “Apollo Belvedere” is a Carrara marble sculpture accompanied by a unique 1/1 NFT. Wunderkammer Gallery, Visionnaire’s showroom in Milano, is the home for this piece during June 2022. Designed and created with globally renowned visual artist Jonathan Monaghan, the artwork is available to be purchased via the 4ART App.

Minted on the sustainable side-chain of Ethereum, Palm Network, with near-zero carbon emissions, ”Apollo Belvedere” will be auctioned off via the 4ART NFT+ marketplace. While Ethereum wallets are optional and available for crypto art collectors, traditional art collectors without any blockchain or cryptocurrency knowledge can also acquire the work via fiat currency or Paypal.

Visionnaire is a benchmark for Interior Design

Visionnaire is the meta-luxury brand that has become the benchmark in the sector of Made in Italy interior design. Partner for bespoke solutions for residential spaces, high-end hotellerie, yachting, and aviation in more than 55 countries, present in more than 30 mono-brand stores and part of a network of multi-brand department stores worldwide. Since December ’21, Visionnaire has been a Benefit Company, defining its business as a promoter of positive value for the community in which it operates.

VISIONNAIRE NFT, established and launched in April 2022, is a project by Visionnaire which investigates the innovative art and design methods made possible by the NFT (Non-Fungible Token) system and Web3.

On the occasion of the 60th Edition of Salone del Mobile in Milano, Visionnaire, 4ARTechnologies and Jonathan Monaghan celebrate with a singular and one-of-a-kind piece of art, in opposition to the ever-evolving and massively reproductive space of NFT art.

The synergy between Jonathan Monaghan’s aesthetic and Visionnaire’s expertise in the production of luxury furniture formed a strong bond between digital design and the tradition of craftsmanship. But the origin of the project goes way back to before their meeting. In fact, the American visual artist imagined the project in 2019, and had the opportunity to bring it to light with the Italian brand’s expertise, support, and enthusiasm.

The physical bust was realized in marble sourced in Carrara, Tuscany, where the stone has been sourced since the Roman Empire. Transported to Northern Italy, the marble piece was cut, carved, and chiseled into the bust of the divine god by the hands of Italian artisans. It took months of physical labor to achieve the idealistic vision of texture, detail, and aethereal softness that Visionnaire and Monaghan imagined.

Combined with the marble bust, Monaghan created a surreal 3D animated video where an alien-like spacecraft reveals the sculpture in a Baroque environment. “The bust is confronted by a fiery red panther, a symbol associated with the ancient Greek god Dionysus and notions of chaos. The Olympian deity Apollo, a symbol of aesthetic perfection, appears to vanquish the beast and restore order to this dream-like world”, the artist states.

A dialogue between physical and digital art

The partnership with 4ARTechnologies made the connection between the physical and digital possible. 4ARTechnologies offered its patented digital fingerprint for the physical sculpture, securely connecting it to its NFT+ with a forensic watermark. The NFT+ is linked to the 4ART artwork passport, which not only contains the original artwork file, but also additional information, documentation, provenance, history, and proof of authenticity and ownership, all part of the immutable metadata, providing unparalleled security and greater transparency for all collectors.

“Apollo Belvedere” brings forward the dialogue between physical and digital displays, and how the relationship between the two environments when brought together can bring a new experience to the public and collector.

As a Benefit Company, Visionnaire’s top concern is to reduce the environmental impact in developing every project. Because NFTs can take their toll on energy consumption, the company took all the necessary steps to account for their footprint throughout this entire project.

Visionnaire chose the Palm network because it offers lower gas fees, fast transaction finality, and a 99.99%+ reduction in energy consumption when compared to Proof of Work Systems. Ethereum mainnet is infamous for being carbon-intensive due to its “Proof of Work” consensus mechanism which requires a large amount of computing power for transactions. The Palm network’s “Proof of Authority” (iBFT2) consensus mechanism requires significantly less computing power. The amount of energy required to mint on the Palm network is equal to sending three emails.

Moreover, Visionnaire partnered again with Rete Clima to cover the CO2 emissions caused by energy consumption. By overviewing the entire design and production process, from the 3D rendering to the transportation of the finalized statue, the total amount of energy consumed was accounted for by taking part in the Allain Duhangan Hydropower Plant project.

Jonathan worked previously with 4ARTechnologies during the Marketplace launch, with the Digital Baroque Exhibition. His featured piece “Memento Eternal 01”  posits connections between the consumerism of the digital age and the decadence of the Baroque era.

The concept for the work is centered around the iconic Fabergé egg with its hidden bejeweled surprise that was produced during the Romanov Dynasty from 1885 to 1916. Created for the Russian Imperial family, the Tsars Alexander III and Nicholas II, they were the most opulent and captivating Easter gifts for their wives and mothers. This and the other works in the exhibition were all sold during the drop. Enjoy Jonathan’s new piece and place a bid if you would like to add “Apollo Belvedere“ to your collection.