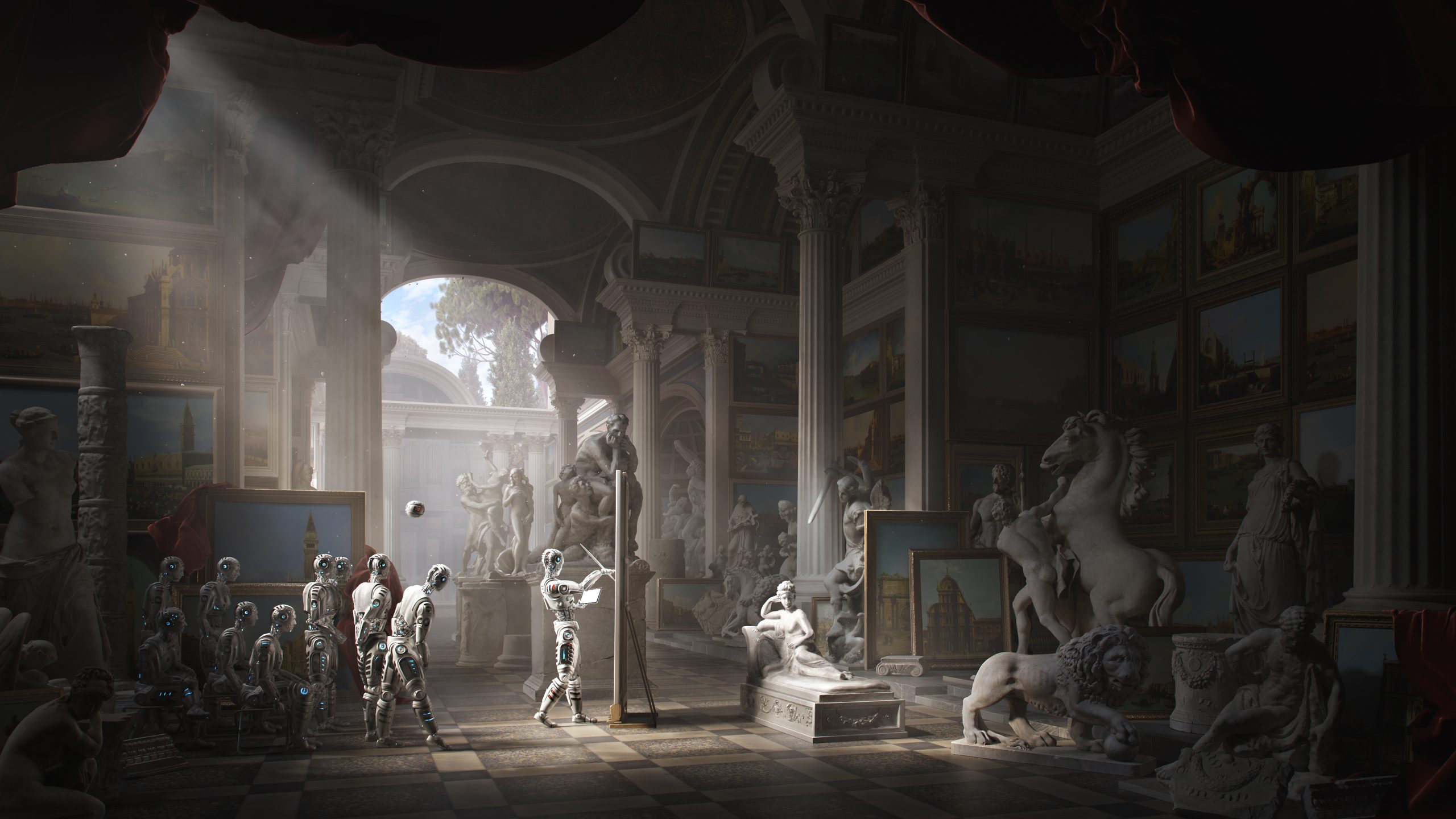 Get ready to explore 11 individual artists and 3 collectives in our inaugural exhibition, Digital Baroque: History Meets Algorithm. We’ve curated a total of 14 physical artworks ranging from data sculpture, AR wallpaper, screen painting and ink drawing, to physical prints and 3D printed sculptures. All matched by a unique NFT in this exhibition minted on the Palm Network.

The exhibition is inspired by Timothy Murray’s groundbreaking book, Digital Baroque: New Media and Cinematic Folds. It provides a Baroque lens on new digital technologies, asking the question: what would Baroque look like in virtual space?

From the 17th to the 18th century the Baroque period of art history took place, bringing about its ornate, eclectic and philosophical flair. Gilles Deleuze created the concept of the Fold, mapping out a Baroque characteristic of nonlinearity, transformation and augmentation. In a world of digital plenty and instability, the Fold can also be considered a feature of our contemporary condition.

With a tension between being and becoming, dissolution and unity, the works showcased as part of this exhibition are endlessly folding and unfurling, referencing both the past and the future in mythology, music and movement.

The virtual show will be available from the 31th January until the 7th of February in the 4ART App’s Marketplace.

This collaboration with Palm, an Ethereum side chain that is over 99% more energy-efficient than Proof of Work-based blockchain networks, is one of the exciting projects 4ARTechnologies is part of to support safe NFTs and exposure of talented artists.

Artists between gems and jewelry

Ahmed Elgammal is a US-based computer scientist and pioneer in AI art.  He is showcasing a video from the series Saskia Reimagined that reinterprets a glittering portrait of Rembrandt’s wife Saskia van Uylenburgh, who died at the age of 29.  The work to commemorate her short life activates her face beneath moving gems. The AI-generated petals and sapphires provide an opulent texture to the work which plays with concealing and revealing, as well as having the corresponding print capturing her face uncovered.

The notion of the bejeweled art object takes on a deconstructed 3D form in Jonathan Monaghan’s Memento Eternal 01. Here he outlines the Fabergé egg — except the jewels are replaced with USB ports, furniture parts and other miscellaneous everyday items. The egg, which is also available as a 3D printed sculpture, has a distinctly retro-futuristic feel and opens to uncover a plush velvet bust with gold buttons. 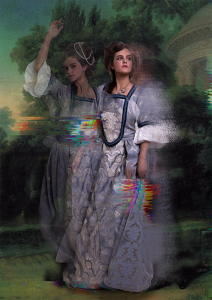 The feminist Rewind Collective takes misrepresented women as their point of departure in the Double Exposure series. The viewer can find a rendering of the last queen of France, Marie Antoinette I, before the French Revolution as a seductively moving, glitching canvas. The work pays homage to this misunderstood historical figure, who was famous for being publicly guillotined following the abolition of the monarchy in France. The doubling of Marie Antoinette’s figure offers an avenue for compassion and reconceptualization while capturing her mutability.

Franco-Algerian artist Neil Beloufa inflects his digital amalgamation of the past with the present using humor. Deepino 4D Max, part of the Deepino Pro Collection series, interrogates what the Nespresso coffee machine would look like if it were an artifact from the Baroque era. This anthropomorphic machine, also presented as a bronze sculpture, morphs into hybrid creatures, referencing the Philosopher’s Stone and Benvenuto Cellini’s salt cellar for King Francis I. The work alludes to surplus value and the machinations of coffee production by depicting a symbol of elitism, luxury, and neoliberal capitalism.

The American multimedia artist Sara Ludy considers the richness of digital materiality and dimensionality in a completely different way, creating a dreamlike, sensory experience in 2D that’s akin to 3D. In Untitled (Night Roses), spectral forms are interlaced and spliced in a layering of texture, showing astral galaxies in the background and opalescent sediments in the foreground.

In Ethereal Glory Yeo represents the Greek concept of ‘Aether’, a personification of the sky and the god of the heavens. She reinterprets Chinese ink painting on linen in blue and gold swathes with white streaks created by toy robots. The artist transforms and assembles this screen painting into a zen-like image that moves, particle by particle, in an anti-clockwise wave.

Botchy-Botchy uses augmented reality software to populate his musical animation and Edo-style ink drawing Hydra Algorithmica. Inspired by the nine-headed serpentine monster Hydra from Greek and Roman myths, he includes a female samurai, a Yūrei (or Japanese ghost) and a six-headed Hydra, whose appendages take on different forms — from a fantastical dotted dinosaur inspired by Yayoi Kusama to a monster evocative of Japanese sci-fi.

Dawes draws from the bust of ancient Greek goddess Aphrodite (the Roman Venus), which morphs and ripples to become a sculptural form that is 3D-printed in resin. It is combined with Baroque outlines to generate an intricate structure marked with golden spheres and floating white tendrils. Music becomes abstraction, movement, and form in a sonic visualization of a moment in time. The title of the work, La Primavera comes from Antonio Vivaldi’s The Four Seasons (Spring).

Vivaldi also modulates peep-o-rama: platonic dialogues by Brooklyn-based artist Carla Gannis, where sound, fantasy, poetry and technicolor merge. An optical illusion is explored through two peepholes in a sculpture revealing a mind-bending interior adorned with AI-generated patterns, from illicit Times Square peep shows to paintings of Dutch interiors. Drawing from the mid-17th century perspective box by Dutch Baroque artist Samuel van Hoogstraten. The digital work represents a cyborg queen, chess pawns, the artist’s avatar, Schrödinger’s cat in the form of a Japanese Lucky Cat figurine, and a spoken word recording from “Platonic Dialogues for Web3 – Between the Ghost of Samuel van Hoogstraten and his Cyborg Queen Mother” by Geoffrey P. Lewis, a text which also accompanies the peep box sculpture.

Pioneering American digital artist Claudia Hart takes musical performance in representational space to another level in a mesmerizing 3-channel work Alice XR: A Machine For Thinking. She features an avatar dancing in a live performance staged by ballerina Kristina Isabelle to a projected musical improvisation by cellist Danielle DeGrutolla. Like in Gannis’s work, all walls are covered with inspiration from Alice in Wonderland motifs: with graphic, augmented reality wallpaper, layered in grids of moving clocks and symbols.

The Basilica of Artificial Consciousness by California-based Leo Isikdogan and Emerson Barrett, transports the viewer to another time and place. In the collaboration between the artist-engineer and celebrity drummer from the rock band Palaye Royale, respectively, the viewer can discern statues, monuments, geometries, apertures and elaborate architecture, created with a custom-designed AI art model. Their matching print looks like a spectacular Baroque-like painting.

Similarly immersive is the Al Baroque Painting by Istanbul-based new media studio Ouchhh, which comes with a data sculpture. Emerging from a dataset of 8,379 widely recognized baroque paintings and over 100 years of art history, Ouchh’s work uses AI and GAN algorithms to incorporate the chiaroscuro technique, an interplay between light and dark to create the theatrical ambiance popular in Baroque art. The algorithm produces dynamic folds, tunnels, and endlessly changing waves.

Just as with several projects, 4ARTechnologies bridges the physical world with the digital universe. Our collaboration with Palm is this exciting and mesmerizing exhibition conceptually carrying historical meaning: from the ancient masters to the new media and technologies used today, including the protection of art in the blockchain world.

Experience past, present and future with 4ART App. Download it today 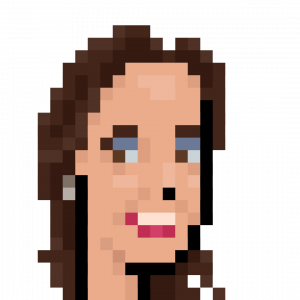 Paulina is grateful that since high school she has had the chance to express herself in both communication and theater🎭. Her experience in communication has been mainly developing content strategies for education and startups.

The best advice she received was from her great grandmother: “happiness is easy.”